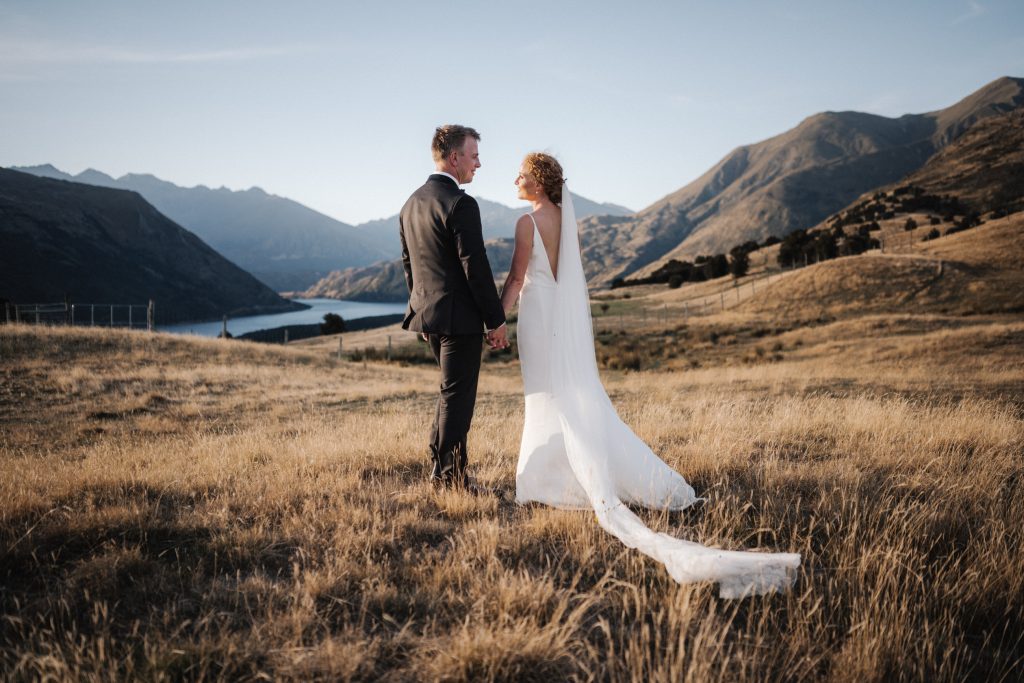 Kenny and Harlow Emily shares the highlights of her uniquely personal Wanaka wedding – complete with jet boating, 4wd-ing and dancing – and her journey to find the perfect classic and elegant wedding dress. 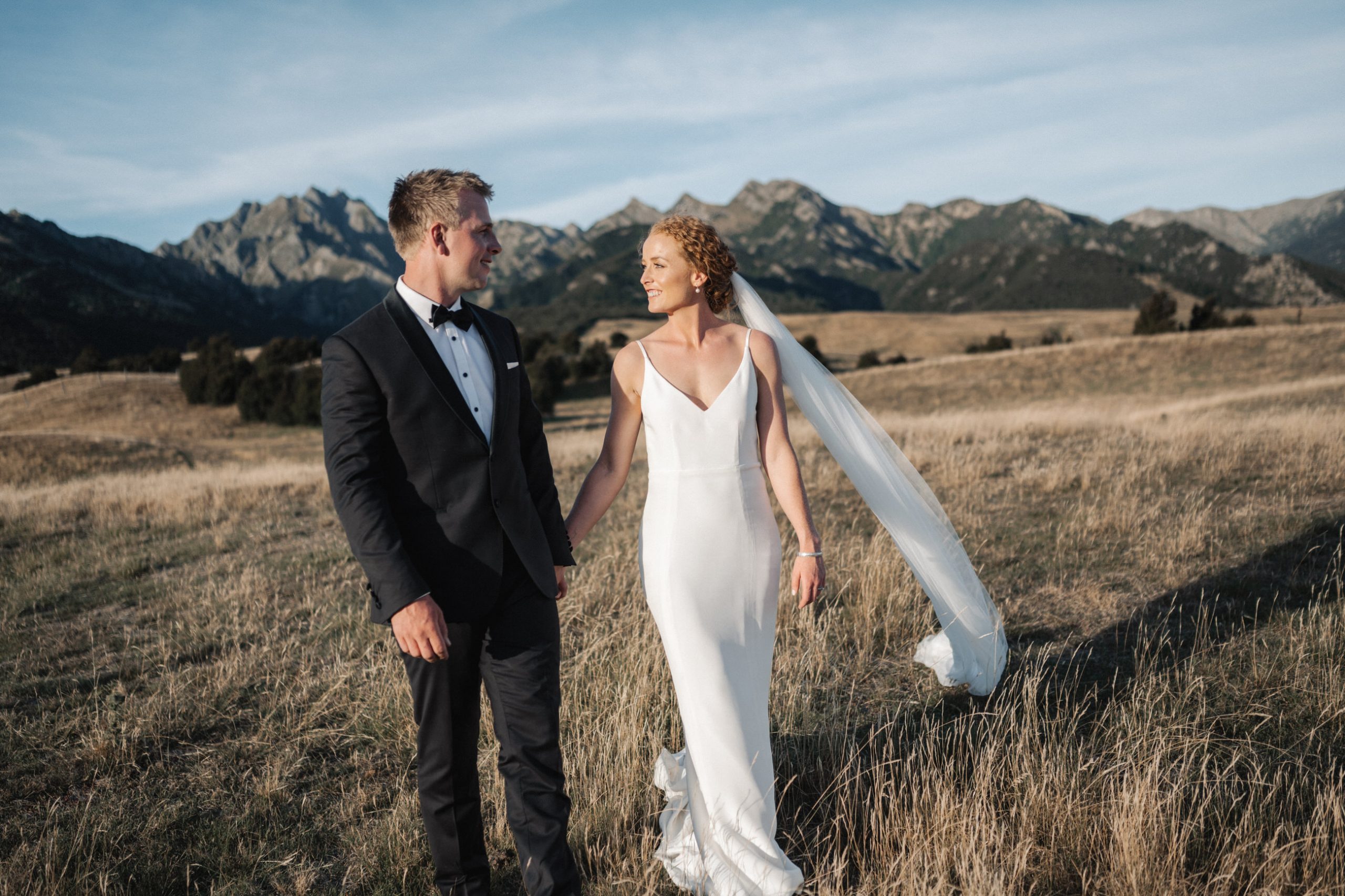 Can you tell us about your dress journey?

I had originally planned to have a girl’s weekend in Melbourne with Mum to find the dress and had been stalking various designers for a while. However, with COVID, that plan was thrown by the wayside and thank goodness it was!

Being from the South Island, I visited a number of local shops but no one seemed to understand my vision and to be honest, every dress felted overdone. To top it off not being a perfect size (and I mean who is!!) every dress was clipped and pinned and pulled into place so I had no actual idea what a dress was going to look like when it arrived (some 6 – 9 months later) and then there were the huge alteration costs!

During this time, I had seen some of Meg’s work on Instagram and felt like our styles aligned well. I put all my eggs in one basket and flew up to Auckland with Mum. 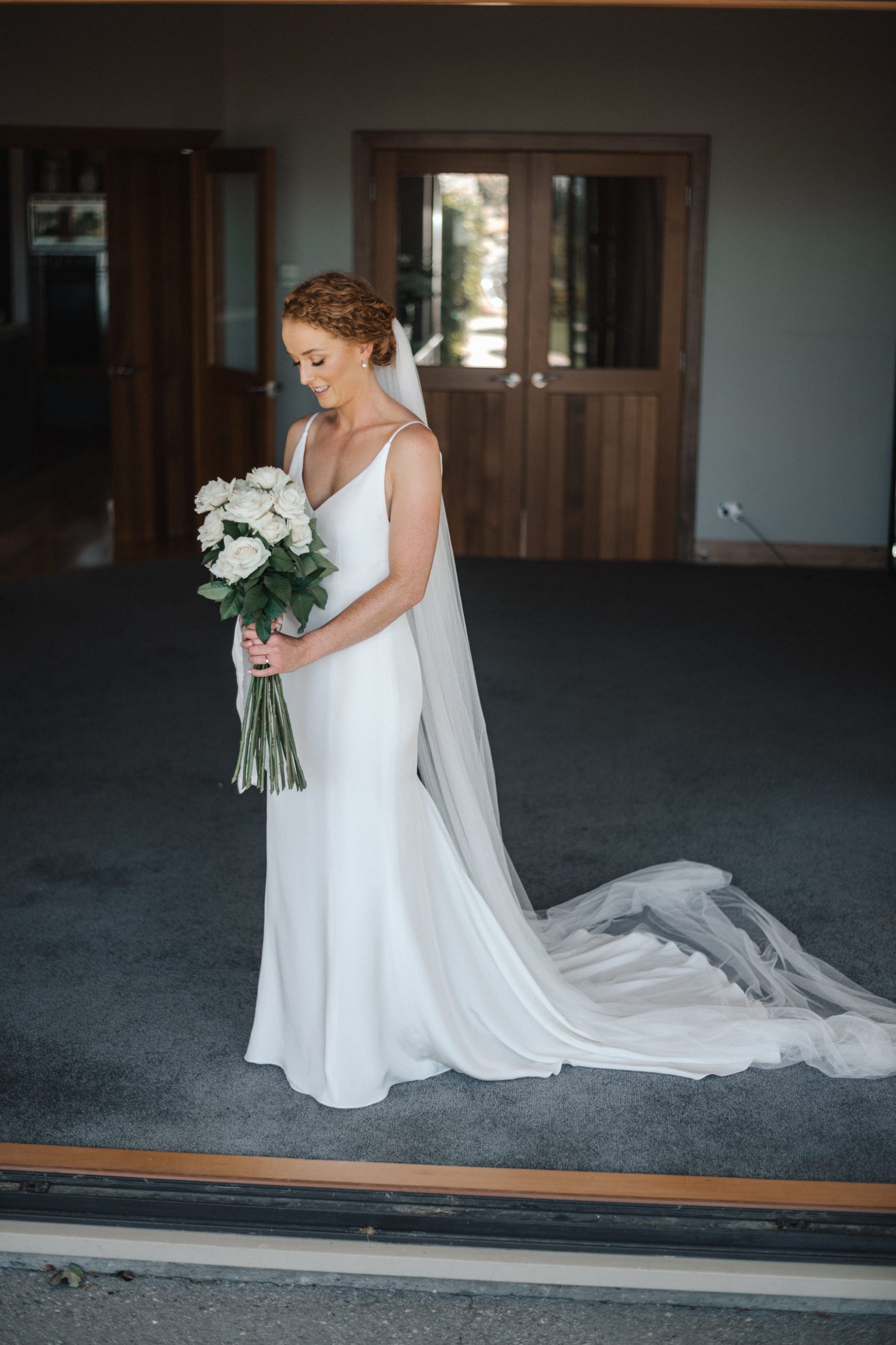 The minute I walked into the studio, Meg and the girls were amazing. They listened and heard exactly what I wanted and made it happen.

Being an “out of town” girl, Meg and the team pulled off a mammoth effort – I tried on the store samples in the morning, and we settled on the design I was after. I returned that afternoon for a fitting in calico, and then was back later the next day to try my dress on in silk!!

A few months later, one month before the big day I returned for final fittings – flying home with my dress two days later!

Meg had an eye for detail that was second to none, which really added magic to the dress – how it fitted, were all the seams sat and moved. Even adding a few pearls to my veil at the very last minute! 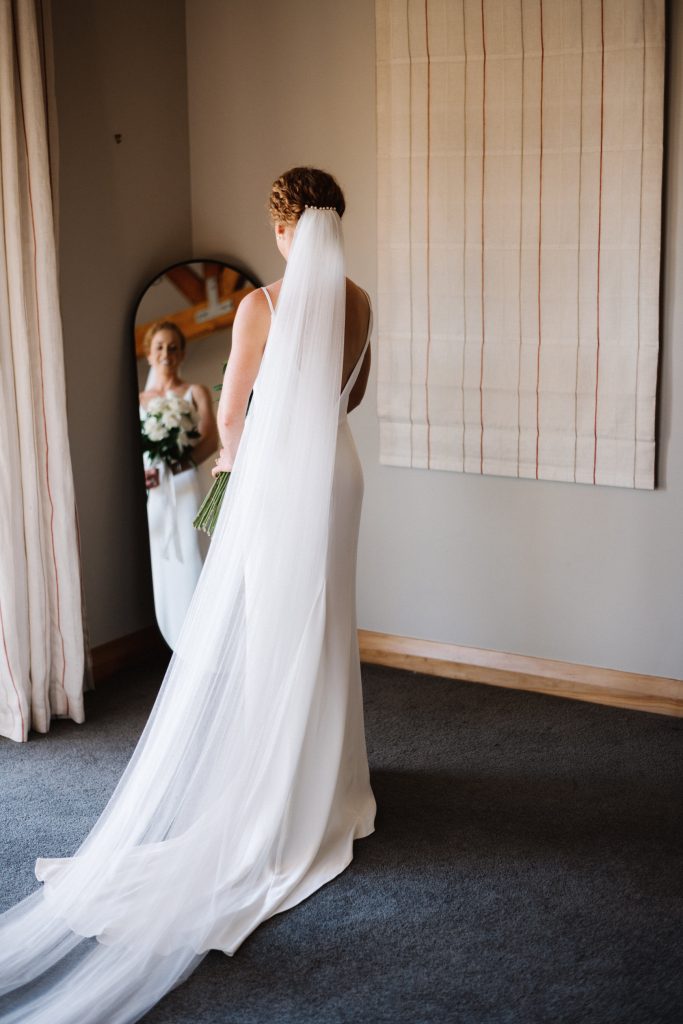 What was your source of inspiration (for your dress)?

I wanted something classic and elegant that could handle everything we had planned – a farm wedding, jet boating, 4wdriving and dancing! 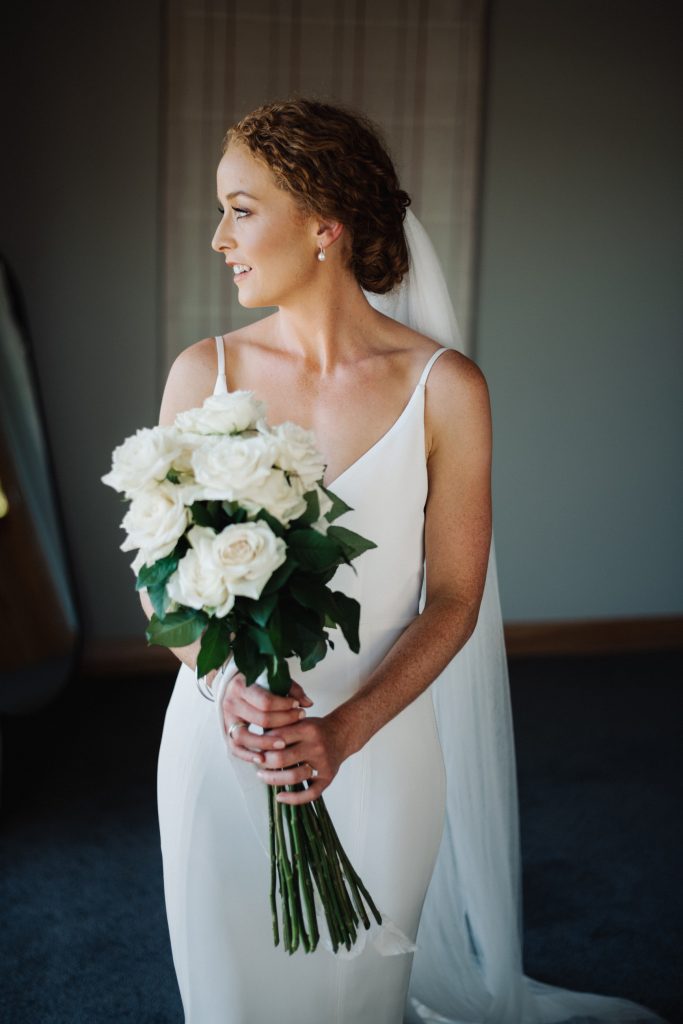 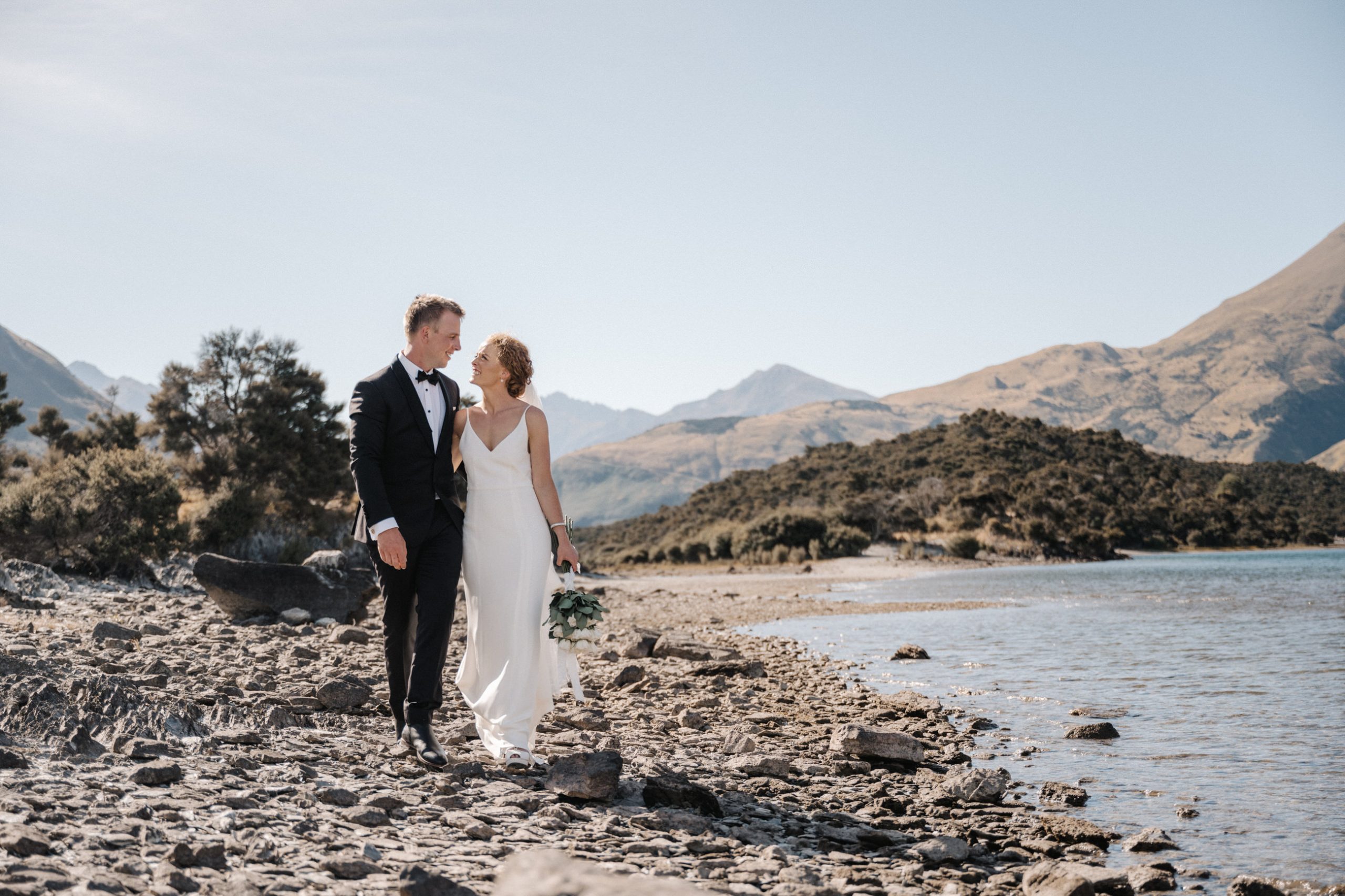 One evening, Matt surprised me by lighting the hot tubs off the front of our lawn (which we never use), whilst I was in the middle of making marmalade to use up an abundance of grapefruit we had been gifted.

After some persuasion I finally got into the tubs, and he popped the question just as the sun was setting. It was so special, just the two of us, at home and a total surprise – I was speechless which doesn’t happen often.

I later found out he had designed the ring himself and it had been sitting in our gun safe for 8 months just waiting for the perfect time!!! 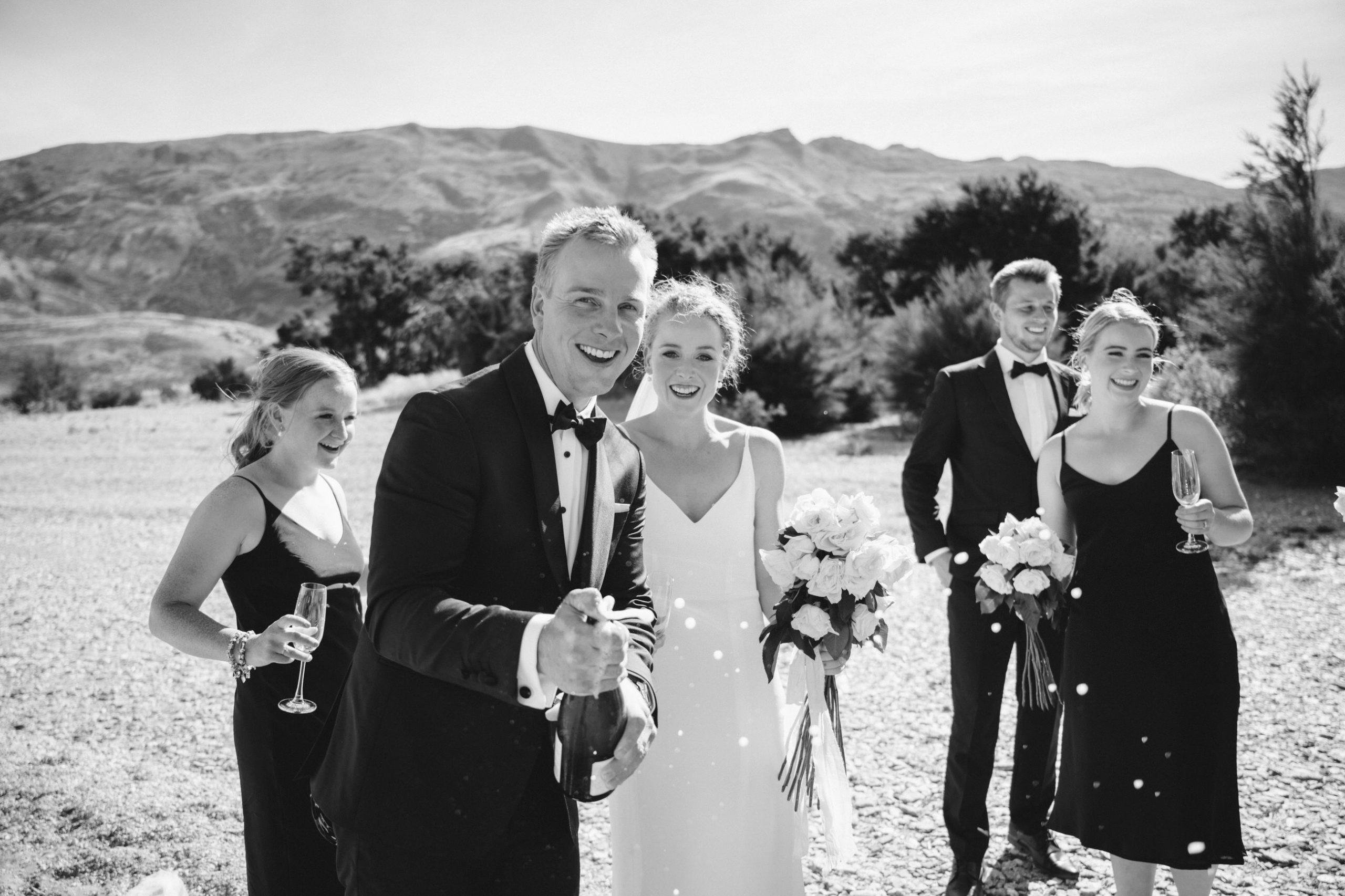 Where did you get married / what was special about your venue?

Matt and I are a classic story of country boy meets city girl, and our wedding was a bit like that. We live on a farm in Tarras, about 20 minutes from Wanaka. We knew we wanted to be on the lake and for it to be a bit rural but not rustic.

In general we aren’t afraid of a bit of a challenge, so we turned a sheep paddock on the shore of Lake Wanaka into an amazing spot with the help of our fabulous vendors.

The location was kept a secret to guests until they arrived via bus from Wanaka – which I am told made for much suspense on the bus. For us it was about sharing what we love about our home with our friends and family – summer days by the water near the mountains. And luckily, we got the most perfect day albeit 35 degrees! 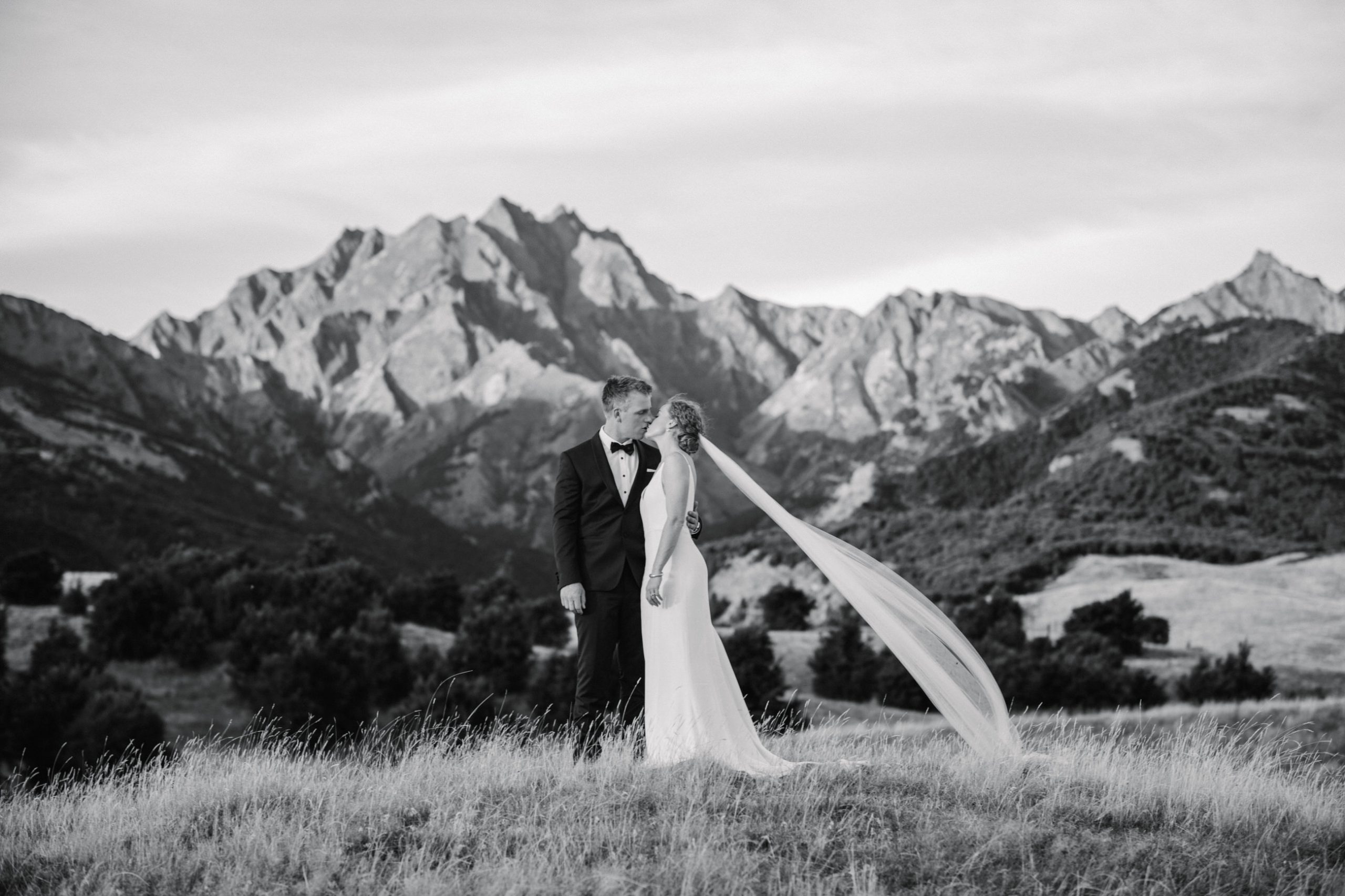 What was your favourite part of the day?

After the ceremony, we jumped in our jet boat with the bridal party and took off up the lake. As soon as we took off Matt absolutely soaked me!

But it was really fun to add a bit of our normal into the day. I instantly relaxed and just enjoyed the rest of the day with the formalities behind us. 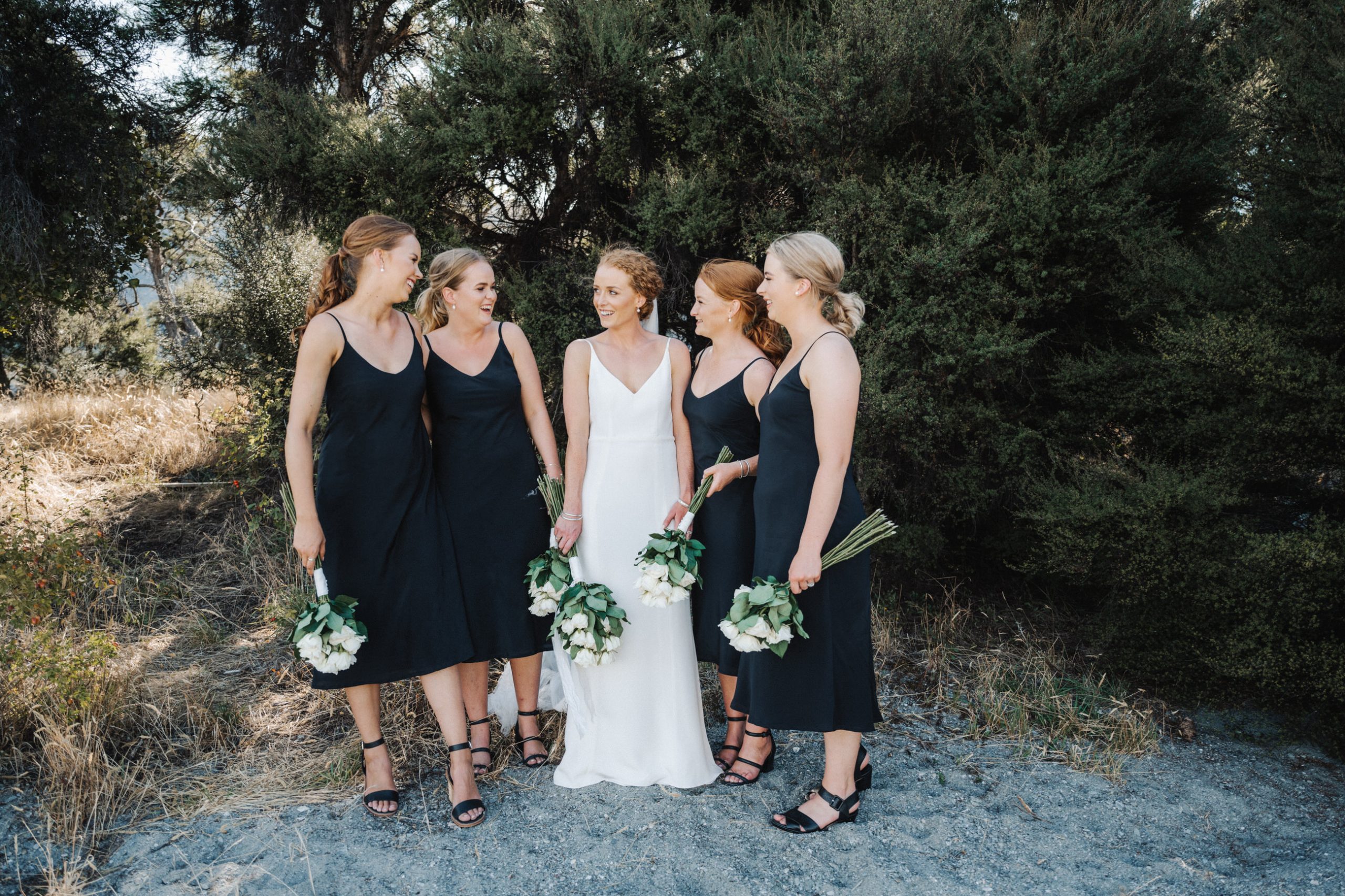 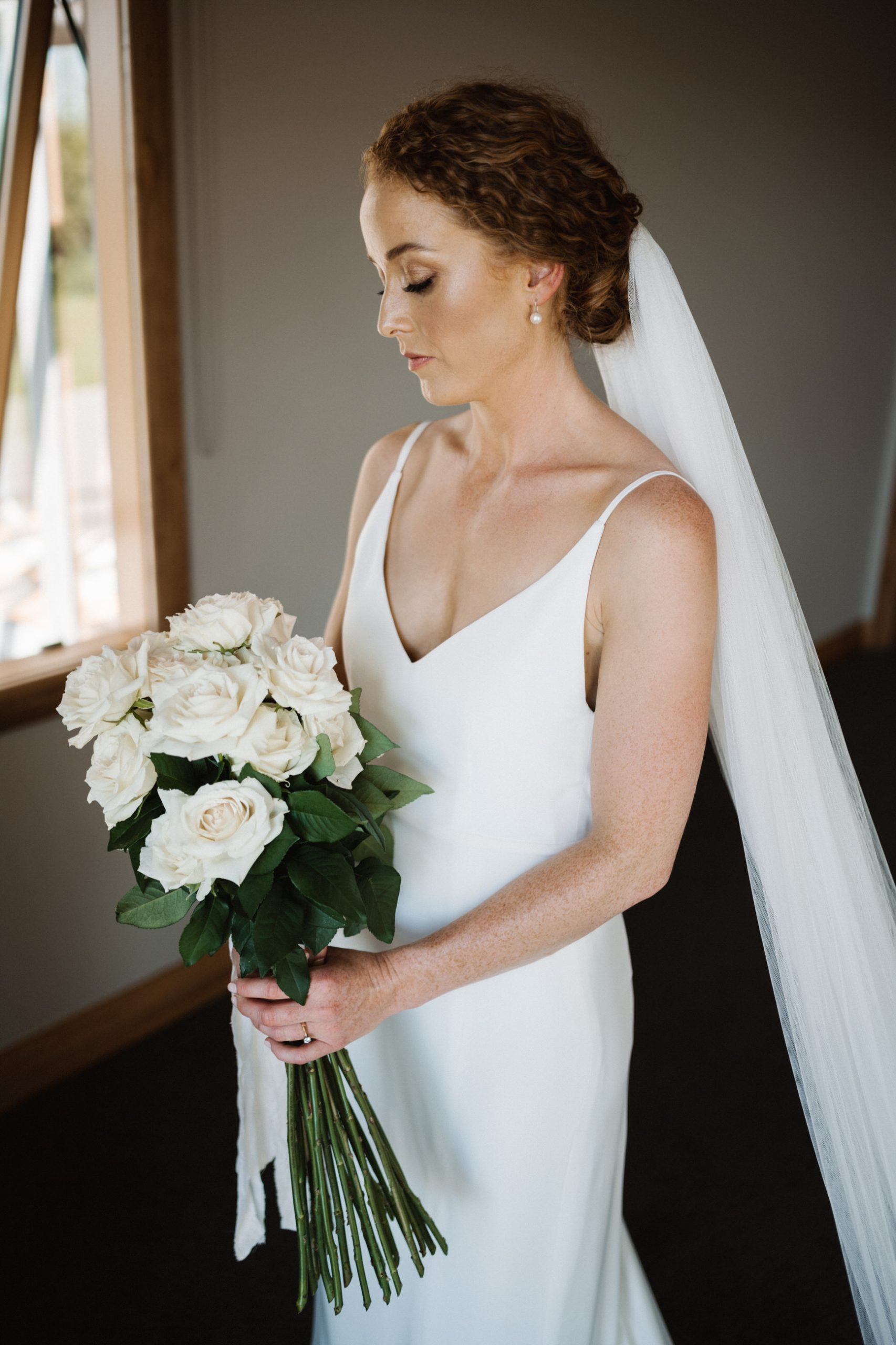 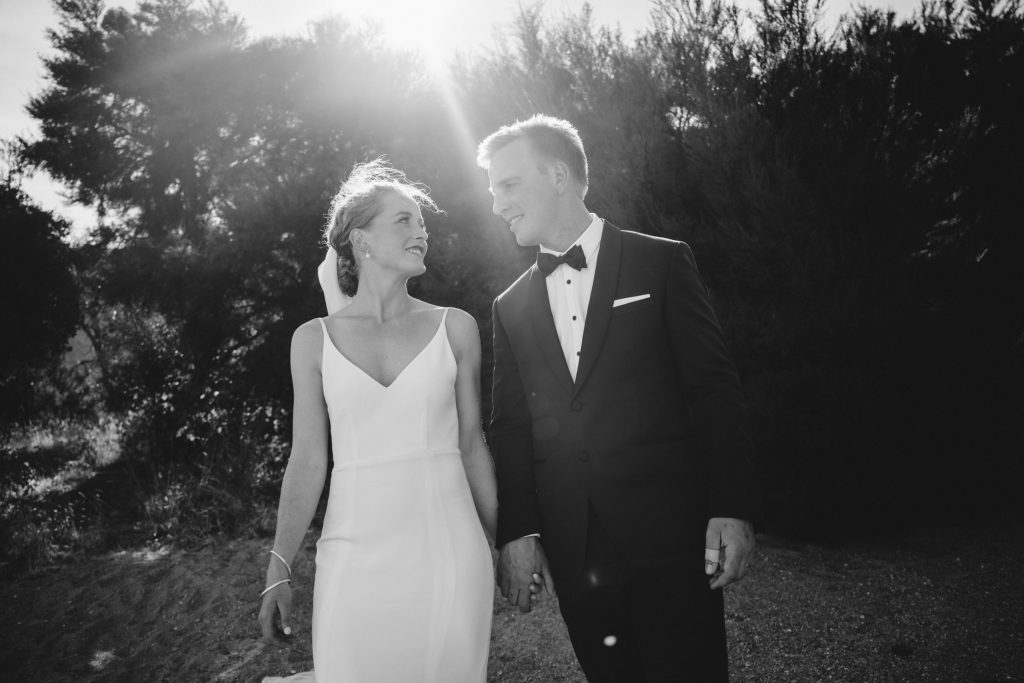 If you could give other brides-to-be one piece of advice, it would be…

You do you – it’s your magical day. Make sure you squeeze in as much ‘you’ as possible. Drop all the ‘shoulds’ and trends and make it a day you will love. 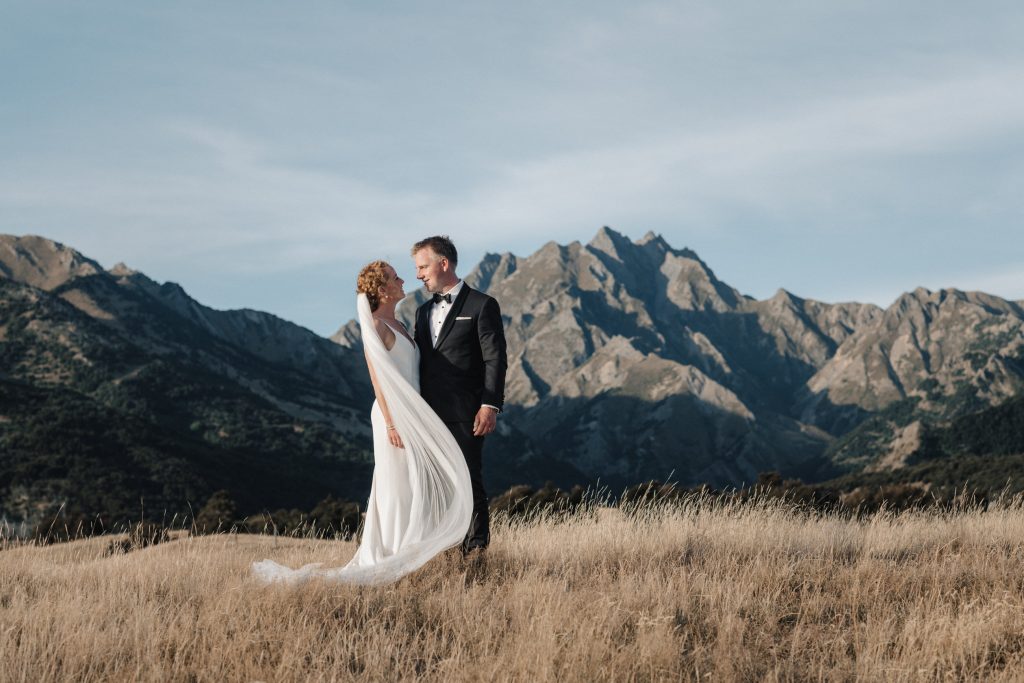 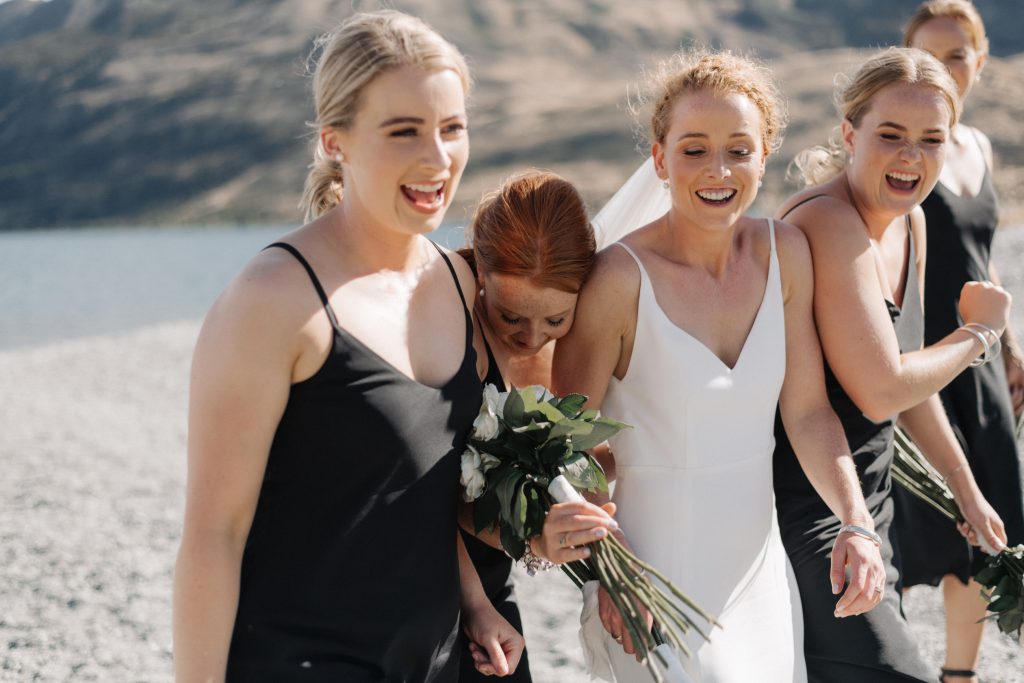 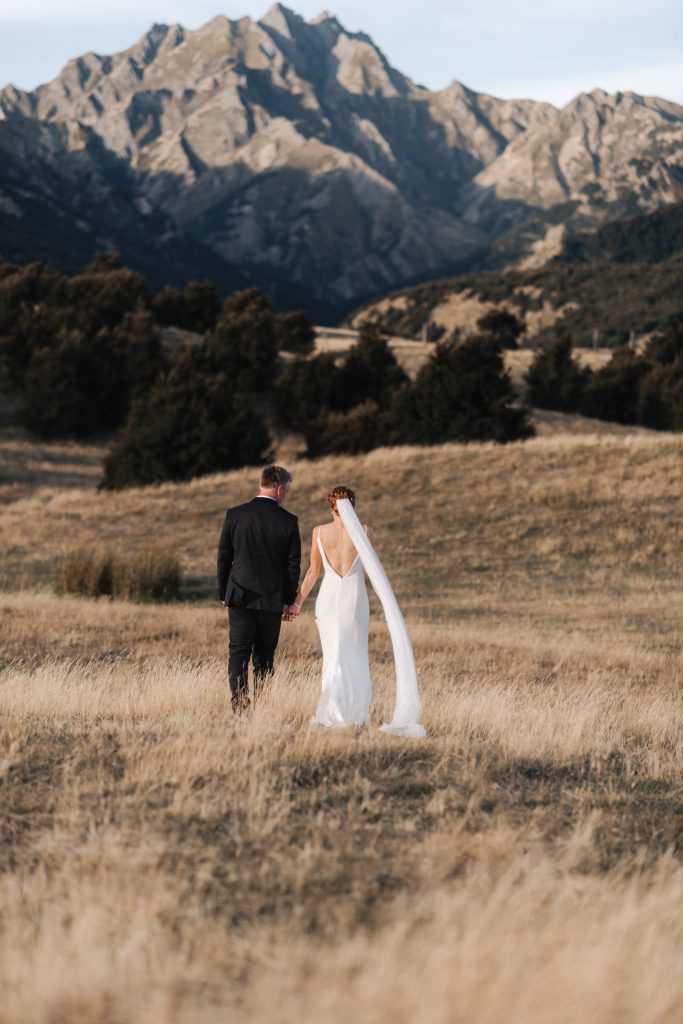 Kenny & Harlow is the bridal wear range of Designers that offers a range of exquisite collections and bespoke designs for all types of brides.